What is a Passport?

A passport is a travel document, issued by the government of a country to its citizens. The document verifies the identity and the nationality of the holder, for the purposes of international travel. The passport is issued in the form of a small booklet that contains the bearer’s name, place of birth, date of birth, address, photograph and signature. The passport number, its date of issuance and expiry are also mentioned in the booklet.

In the UK, the passport is issued by the HM Passport Office, which is a part of the Home Office. The HM Passport Office provides passport services for British nationals residing in the UK and, in association with their partners at the Foreign and Commonwealth Office, to those residing overseas.

A passport is essential if you wish to travel abroad and serves as proof of your identity and nationality. You might need to present your passport several times while visiting a foreign country and entering into any kind of business or work relationships there. Apart from being an identification proof, a passport is also required to check into a hotel or while changing money into the local currency. The passport needs to be valid for at least six months from the date on which you arrive in the foreign country.

According to the International Civil Aviation Organisation’s DOC 9303 “Machine Readable Travel Documents,” passports need to follow specific regulations for their construction, layout and contents. As per the regulations, a passport must be in the form of a booklet, with at least eight pages and a data page. The information on the data page must be in specific locations and zones on the page to allow it to be electronically read. The passport also needs to have certain mandated security features to avoid counterfeiting and fraud.

However, a passport alone is not adequate for you to travel to a foreign country. You might need to apply for a visa before you can enter the nation. Different types of passports are issued by the HM Passport Office, depending on the status of the bearer. The office also issues e-passports or biometric passports that contain an embedded microchip, which makes them machine readable.

You need to get your passport apostilled and legalised before submitting it for work or business visa applications or any other legal matter in a foreign country. The legalisation of your documents confirms that the signature, seal or stamp on the document concerned is from a UK public official and authentic.

A passport is a crucial document, required for travel to a foreign country. It certifies the identity and nationality of the passport holder. A passport needs to be presented at various places in a foreign country and is accepted only if it has been legalised. In the case of passports issued by UK authorities, the legalisation process is completed by the UK FCO.

Legalisations.org.uk has years of experience completing the legalisation process for both individual and corporate clients, for a wide range of documents to be used in any other nation in the world. We will take care of the entire process on your behalf, which means that you do not need to visit any government or consular offices personally. Our expert team will not only check the documents to be legalised for their format, but also get them notarised or certified by our in-house solicitor. We will then submit the documents to the FCO office in Milton Keynes for the apostille certificate. We will also submit the apostilled documents to the respective embassy for consular legalisation, where required. We ensure the safe return of all your documents via courier, once the process of passport document legalisation is completed.

For any queries regarding the process, kindly send an email to info@legalisations.org.uk. You can also call us at 0845 224 9482.

How do I apostille my passport from the FCO?

Legalisations.org.uk offers the full range of services for the legalisation of your passport and other documents. You can get in touch with us through email at info@legalisations.org.uk or call us at 0845 224 9482 for all your passport document legalisation needs. Our experienced team is well versed with the entire process and can help in completing the same smoothly. They will ensure that your documents are in order before submitting them to the Foreign and Commonwealth’s Office (FCO) in Milton Keynes for the apostille certificate. They will also collect the apostilled documents and submit them for consular legalisation, if required, before returning them to you.

The apostille is issued onto a photocopy of the passport, with the original remaining untouched. The process of passport apostille involves the following steps:

Step 1: A copy of the passport needs to be first certified by a registered solicitor or Notary Public in the UK. Our in-house solicitor will take care of the attestation, verification and ratification of your passport documents, before submitting them for apostille certification.

Step 2: Submission of the certified documents to the UK FCO.

Step 3: Collecting the apostilled documents and submitting them for further consular legalisation, if required.

Step 4: Collecting the documents from the embassy and returning them to you.

You can send your documents to us via courier or deliver them personally at our London office. Our expert team will complete the entire process of passport apostille certification on your behalf.

How much does the passport apostille legalisation cost?

The FCO charges a fee of £75.00 for passport apostille certification. Legalisations.org.uk offers the entire range of legalisation services. We offer two packages. Our service fee for the Standard package is £105.00 (+ VAT) and £135.00 (+ VAT) for the express package.

Our service charges are inclusive of the in-house solicitor fee, which means that our solicitor will verify and stamp your documents before their submission to the FCO.

How do I send my passport to you to be legalised?

You can send us the original passport and we will get the required certification completed by our in-house solicitor before submitting it for apostille certification.

Can I send my passport to be legalised from abroad?

Yes, you can access our services from anywhere in the world. You can send us your original documents safely using UPS or DHL international delivery services and our expert team will complete the entire process of passport document legalisation.

We, however, request you to send us an email containing the scanned copies of the documents beforehand, to help us avoid any confusion or misunderstanding. We also recommend that you find out whether the country in which you wish to present the passport is a part of The Hague Apostille Convention of 1961. This is important, since countries that are not members of this treaty will require an additional step of consular legalisation of documents.

Who can legalise my passport?

The first step in the process of passport document legalisation involves authentication, verification and ratification of the document by a registered solicitor or notary public. This is followed by the submission of the certified photocopy of your passport to the UK FCO for apostille certification. Once the apostille certificate is attached, the documents might need to be submitted to the embassy of the country to which you wish to travel for further consular legalisation. This is required only in the case of countries that are not signatory members of the Hague Convention of 1961.

The expert team at Legalisations.org.uk is well versed with the entire process of legalisation and will ensure that the photocopies of your passport are attested by our in-house solicitor before submitting them to the FCO, for the apostille. We will also collect the apostilled documents from the FCO and submit them for consular legalisation, where required.

We will then send the legalised documents to you via courier or you can choose to collect the documents from our London office.

An apostille certificate is issued by the UK FCO, after the document has been authenticated and verified by a registered solicitor or notary public. The A5 sized certificate is attached to a certified photocopy of the passport. 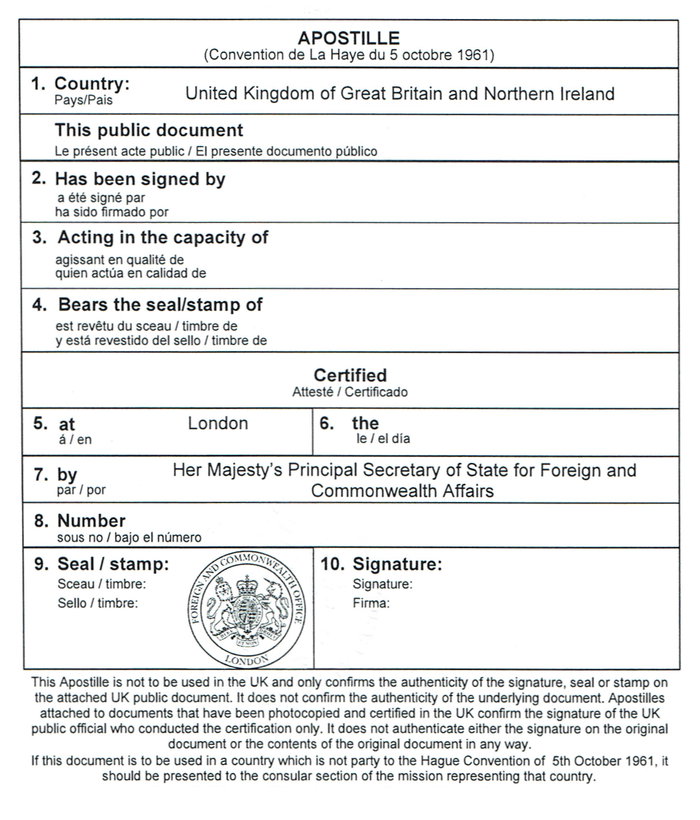 Apart from this, the apostille bears a red embossed seal with the UK government’s crest.