What are HMRC Tax Documents?

Her Majesty’s Revenue and Customs or HMRC is the official non-ministerial department of the UK Government, responsible for tax collection, payment of national minimum wages, issuance of national insurance numbers and other forms of state support. In the UK, different bodies are required to file tax returns with the HMRC, based on their liability for taxation. This includes non-UK residents, subject to UK taxable income laws.

There are several documents, related to taxation, issued by the HMRC, based on the tax law and paying entity:

These HMRC issued tax documents need legalisation before they can be used for business transactions or employment applications abroad. For instance, many non-UK residents working in the UK will need legalisation of the P60 document to serve as proof of earnings and employment, if they would like to avoid double taxation in their home country. In a similar manner, UK citizens will need to legalise HMRC tax documents, such as P45, in order to serve as proof of employment and taxation in a foreign country, where they have been offered employment.

Legalisation of HMRC tax documents is completed by the UK Foreign & Commonwealth Office (FCO), which is the sole authority to attach the apostille certificate to these documents. Apostille is a special form of legalisation, which gives public documents legal authenticity to be used in other countries.

The UK is a member of the 1961 Hague Convention, therefore public documents such as HMRC tax documents are acceptable by all other member nations of the convention as they bear the FCO apostille stamp. This convention abolished the requirement for consular legalisation of public documents to be used for cross-border purposes among signatory countries. However, if the country where the document has to be used is not a member of the 1961 Apostille Convention, the HMRC tax documents will require legalisation by the respective Embassy in London, after FCO apostille certification.

It is also to be noted that the FCO requires verification and attestation of certain documents by an accredited notary public or solicitor in the UK, before it attaches the apostille stamp.

Tax returns are vital official documents, required for many types of foreign business transactions and employment formalities. They act as proof of a company’s or individual’s tax liability, employment and serve as proof of good citizenship if necessary.

The HMRC is the official body in the UK that processes, collects and accepts tax return filings from corporate entities and UK-based employees. Various types of HMRC tax documents need legalisation by the UK FCO and the nation’s embassy in London, for application of business visas, employment visas and official visit visas, drafting of legal documents, avoiding double taxation in other jurisdictions.

Legalisations.org.uk has years of experience with legalising documents to be used abroad. We work with a large network of expert agents, lawyers, solicitors, consular and government officials to provide legalisation services with the fastest turnaround times. You can trust our vetted agents to take care of your important company and individual tax documents. They will also carry out detailed pre-checking of documents to ensure that they are in the format prescribed by the FCO and the Embassy.

You can email us at info@legalisations.org.uk with all your queries and requirements, or call us at 0845 224 9482. Please fill this contact form, and one of our representatives will get back to you.

How Do I Apostille my HMRC Tax Documents from the FCO?

To get your HMRC tax documents apostilled by the UK FCO, submit them to Legalisations.org.uk. Our agents will take care of all the requirements, including booking appointments with the legalisation offices at the FCO and the Embassy, where required, followed by submission of your documents as well as collection after the process is completed.

The process followed for the legalisation of tax documents is as follows:

Step 1: The process begins with you informing us of your document legalisation needs by sending us an email at info@legalisations.org.uk. We will then advise you on the further steps and quote our fees. You can also get in touch with us at 0845 224 9482.

Step 2: You can send your documents to us through courier or submit them personally at our office in London. Send the documents through UPS or DHL international delivery, if you are not residing in the UK.

Step 3: Our agents will submit the documents to the FCO legalisation office in Milton Keynes, London. If the documents need prior notarisation, our in-house solicitor will take care of that.

Step 4: The FCO will take a day or two to attach an apostille certificate to the HMRC tax documents. You can choose our same-day service package for urgent purposes. Our agents will collect the documents whenever the process is completed from the FCO office.

Step 5: If your document requires further Embassy legalisation, our agents will submit the documents to the respective consular office in London for further processing. All the documents will then be sent back to you safely, either through courier or in-person at our office.

How much does HMRC tax documents apostille legalisation cost?

To attach the apostille stamp, the UK FCO charges a fee of £75.00 per document. Our service charges are £105.00 + VAT for the Standard package, in which you will receive the legalised documents within 6 business days. For the Express package, we charge £135.00 + VAT, which ensures delivery within 2 business days.

Note that the service charges are inclusive of our in-house UK solicitor fee.

Legalisations.org.uk is committed to providing you the most efficient services at competitive rates, in order to make the entire process efficient.

How do I send my HMRC tax documents to you to be legalised?

Send us your documents through courier services, such as Royal Mail or special delivery services, to our office address in London. You can also choose to personally drop the documents off at our office.

Can I send my HMRC tax documents to be legalised from abroad?

Even if you are not currently residing in the UK, we will take care of all your legalisation requirements. Send us the required documents through UPS or DHL international courier services.

We recommend that you send us a scanned copy of the documents through email before you courier them. This helps us check that we have received the right documents and prevents any unnecessary delay in the process.

Who can legalise my HMRC tax documents in the UK?

The UK Foreign and Commonwealth Office (FCO) has the sole authority to verify that the UK public official’s signature, seal or stamp on your tax documents are authentic. After this verification, the FCO issues the apostille certificate and stamp on the reverse of the original HMRC tax documents.

Since the UK is a member of the 1961 Hague Apostille Convention, the apostille stamp alone will suffice for the document to be considered legal for foreign transactions in any of the other signatory countries. However, if the destination country is not a member of this convention, the HMRC tax documents will need to be further submitted to the respective embassy in London for legalisation. This will be completed by the consular or legalisation department at the Embassy.

Please remember that the FCO will issue the apostille certification, only when the documents have been attested by a notary public or solicitor in the UK.

While various nations have their own designs for apostille certificates, the UK apostille is an A-5 size sheet attached to the back of the original document permanently. There are typically 10 sub-sections in this certificate: 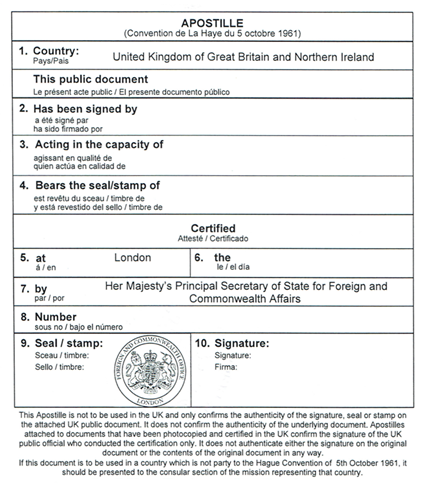 After the apostille certificate is attached, a red seal, bearing the UK Government’s crest, will be embossed on top of the document. This is the apostille stamp, without which the process would be incomplete.